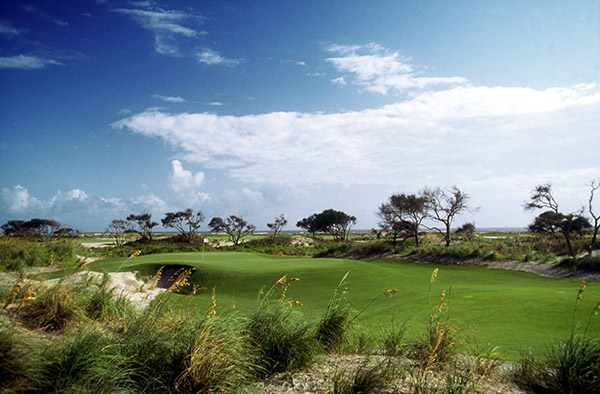 For the visiting golfer, Charleston, South Carolina’s reputation rests on Kiawah Island.  And Kiawah’s golf reputation goes no further than the seminal Ocean Course, wild and windswept, a harrowing ground on the island’s easternmost end.

It was the first time ever that the Ryder Cup had been awarded to a course that didn’t exist.  The powers-that-be decided that the matches needed to be moved from California to the East Coast, so that a European television audience could watch the drama unfold live.  As a result, Pete and Alice Dye, hired in the late 1980s, had only two years to build a seaside masterpiece, one that would not only challenge the world’s most talented professionals in the autumn of 1991, but would be enjoyable for generations of golfers to follow.  They succeeded magnificently.

“When I first walked the land, I fell in love with the site,” recalls Dye.  “This narrow, two-and-a-half mile beachfront had beautiful ocean views on one side and vast saltwater marshes on the other.  I would have bent down on my knees and begged for the opportunity to build there.”

The Dyes worked 18-hour days, come hell or high water.  And they dealt with both.  Hurricane Hugo battered Charleston mercilessly in 1989, flattening the landscape and toppling trees like dominoes. But the indefatigable architect worked on nonetheless. Though the roads were closed for weeks, he took a boat to the island, and he and his crew built the leveled dunes back up with bulldozers. They quickly re-created the stunning routing that had just begun to take shape prior to the monster storm.

The course was ready just in time, and the 1991 Ryder Cup was the most grippingly contentious international golf match ever played.  It was a down-to-the-wire affair, draining for players and spectators alike.  Victory for the host team was only assured when European stalwart Bernhard Langer narrowly missed a six-foot putt on the final green of the weekend’s final match.  Had the putt fallen, the visitors would have captured the Cup.

What makes the Ocean Course so mesmerizing, so memorable?  It’s the once-in-a-lifetime location.  It’s the dazzling views and the omnipresent ocean winds, which seem to come from everywhere at 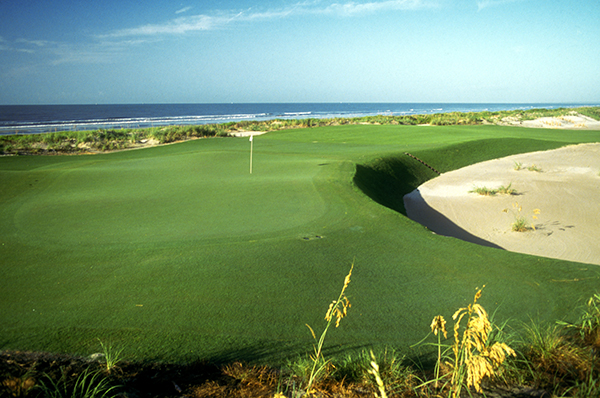 once, buffeting both player and ball, then dying away in an instant.  It’s the prospect of disaster lurking on virtually every shot--a favorite saying among staffers is: “we don’t sell golf balls, we rent them.”  The minimal housing presence adds to the wild and woolly landscape. The dedicated turf on the course is just 55 acres, but the vistas, seascape, wetlands, sand, and ball-eating vegetation occupy an area six or eight times that size. Brawny as the golf course appears, with generous fairways, oversized greens, and cavernous bunkers, it’s dwarfed by the majestic natural panorama: the sea, sky and sand that surround it.  The course returned to the international spotlight in 2012, hosting the PGA Championship, won in convincing fashion by megastar and former world #1, Rory McIlroy, the first of golf’s professional Majors to be contested in South Carolina. The venue proved so successful for both players and spectators that the course will once again host the PGA Championship in 2021.

The Ocean Course, brutally difficult and beautiful, is indisputably one of Dye’s very best.  It’s one of the most thoroughly invigorating psychological and physical battles a player will ever find in this great game.

Next - The Golf Club