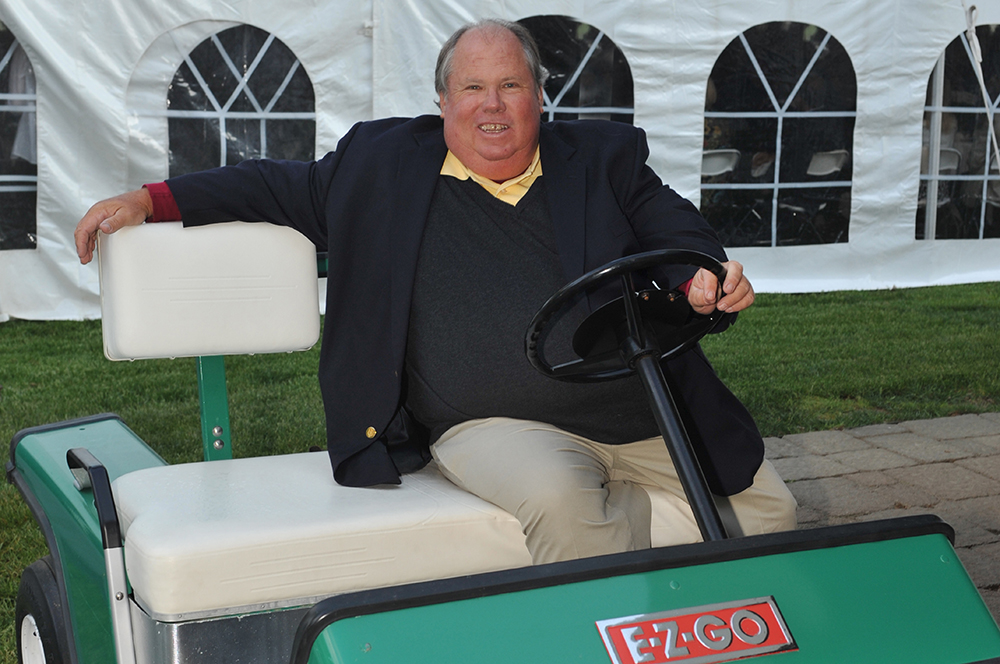 The Dye Family is known for their hands-on attention to detail. They prefer to take responsibility for virtually all aspects of a golf course design, rarely delegating their authority. P.B. Dye, the younger of Pete and Alice’s two sons, embodies this philosophy as much as anyone else in the family.

His unique viewpoint is even more perceptive, considering he and his wife Jean chose not to have children themselves. “Building a golf course is like having kids,” begins P.B., always ready with a quip. “The more time you spend with them, the better they’re going to turn out!”

P.B. Dye has an eclectic course-building resume, befitting the free-spirited nature of an artist who has chosen to remain unencumbered by an office, a wristwatch, and a support staff.

However his foundation in the business is rock solid, beginning at world famous Crooked Stick outside of Indianapolis at the age of eight. When other boys were playing with Tonka trucks, P.B. was learning his way around the real thing, and it wasn’t long thereafter he was actually in the cab of these monster earth-movers, shaping the landscape himself. “The Honors Course near Chattanooga, Long Cove and Harbour Town, both on Hilton Head Island, and the Golf Club outside of Columbus, Ohio, were all places I worked, and influenced my work later on,” explains P.B., referencing a quartet of the finest courses in the country, all of which spent time on various Top 100 Lists.

“I try and create memorable holes, with sharp angles and soft angles meshing together. Sometimes I get accused of being too radical, but when critics mention the abrupt nature of some of my work, I remind them that the great courses of the 1920s had all sorts of bold featuring, and they are among the most desirable courses in the world. Think about great Scottish courses like St. Andrews or Carnoustie. They have sod wall bunkers that are six and eight feet high, very difficult to maintain. But we cherish those courses, and people travel from all over the world to get a crack at them!”

P.B. Dye is proud of his work at Hidden Glen in Wisconsin, and Italy’s Parco di Roma, just four kilometers from The Vatican. Club de Barbaroux in southern France is another highlight. Fisher Island near Miami, one of the nation’s most expensive addresses, is another one of his most memorable creations. “I attempted to get eighteen holes worth of fun into nine, and most residents think I succeeded!”

Nothing on his resume provides more satisfaction than the work he did at the ‘original’ Dye design—Urbana Country Club in central Ohio. “I don’t know how many grandfather-grandson co-designs there are in the country, but there can’t be many,” referring to the second nine he added to the course his grandad, Pete Dye’s father Paul, built in the 1920s. “$240,000 is all it cost to build that additional nine, and I’m proud of that. The club had very little money, and I respected the fact that the budget was so modest. My grandmother asked me to complete the course in 1992, and it was my honor to do so. It just so happens that Urbana is one of my favorite places to be, but only in the summertime!”

The family connection continues to run deep, even as ‘the little brother’ is now past sixty. “Lately I’ve been assisting dad with renovations at the Golf Club in Ohio, at Gulfstream in Florida, and finishing a course in Maryland called Chesapeake Links that my uncle Andy Dye began nearly fifty years ago!”

Not every architect gets a course named in his honor. The P.B. Dye Golf Club in Maryland is an enduring legacy, beyond the fact the namesake spent more than four months on site shaping the earth himself. “The principles were very impressed with the Pete Dye Golf Club in West Virginia, obviously named in honor of dad, and asked me if I would put my name on their course. It was my honor, particularly as I was just coming back from cancer surgery. Furthermore, it’s always special to build a course with no housing component.”

As long as he works, he plans on doing the heavy lifting himself. “It’s much easier for a sculptor to carve the stone himself, then delegate it to someone else. That’s how I feel about my golf courses,” he states matter-of-factly. “I try and create illusions, challenge, sometimes frustrate the golfer, and above all, make it fun! Think about the funhouses we enjoyed as kids, when a ball would seem to roll uphill. It’s my goal to keep the golfer guessing, make him or her concentrate, and want to give the course another try.”

P.B Dye doesn’t consider his fellow golfers as enemies, far from it. But he appreciates the fact that their relationship can be adversarial. “What can I say,” concludes the most iconoclastic Dye. “Other than I’m an expert bulldozer operator with a scratch handicap and an Irish sense of humor!