When plumbing magnate Herb Kohler had the seemingly head-scratching idea to create a resort experience outside of Sheboygan, Wisconsin, the golf component wasn’t his first priority. Pete Dye came into the picture as Kohler continued to add amenities to what was becoming, in piecemeal fashion, an unlikely resort complex in the factory Village of Kohler, an hour north of Milwaukee.  The genesis of the project was Kohler’s renovation of The American Club, an out-of-use worker’s dormitory located across from the company factory.  Though outside consultants did not endorse his decision, rather than raze the historic 1918 structure which was in virtual disrepair, Kohler opted for a comprehensive renovation.  Three years later, in 1981, the former dorm had been reborn as a luxury inn.  “I built the hospitality business with zero vision,” admits Kohler.  “We had one little success built on another little success, and suddenly the combination of those successes and the demand for golf became synergistic.”

Pete Dye’s initial creation was named Blackwolf Run, after a prominent Winnebago Indian chief from the 1800s.  Shortly after opening for play in the summer of 1988, there were lines outside the pro shop door.  Golf-loving Wisconsinites and guests of The American Club, which for the first several years had been shuttled off to public courses, had never before had nearby access to such a beguiling venue, with its rolling terrain, woodlands, wetlands, abounding creeks and streams.  But despite the serene setting, with native grasses, unusual mounding, and a color palette of dazzling flowers, it was the strategic element of the routing, the go-for-broke mentality that golfers found irresistible, making the course an instantaneous hit.  “I don’t know if I could ever design a course hard enough to keep dedicated golfers on the sidelines,” states Dye.  “They love to dig in, fight me tooth and nail, and though they curse, scream, and call me names, that one memorable shot will always bring them back for more.”  At Blackwolf Run, there are dozens of memorable shots.  So it’s not hard to envision Herb Kohler, triumphing at the sight of a perpetually filled tee sheet, summoning Dye again, and commanding, “Build me another.”

The third nine opened in the summer of 1989, and an additional nine the summer after that, totaling 36 holes. Utilizing eight of the existing holes from the original Blackwolf Run and nine of the new holes, Meadow Valleys was created. This second 18-hole course is considered the most playable of what eventually became four courses at Destination Kohler.  It looks and feels more like a traditional Wisconsin golf course, the rolling, farmland feel with silos in the distance, than the other venues. 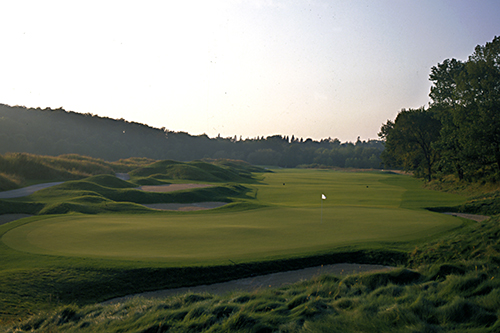 The River Course is an absolute stunner.  It features the daunting Sheboygan River on twelve holes and is an extremely scenic parkland experience, heavily wooded, with abundant wildlife.  It’s a bit more target oriented, with accuracy more of an imperative in comparison to its adjacent neighbor.  In autumn, golfers get more to remember than just the changing colors of the trees.  There’s also a salmon run in the Sheboygan River, and anglers vie for prime position on its banks with the same sense of urgency as do the avid golfers lining up for tee times.

The original Blackwolf Run is holes one through four, and 14 through 18 on the River, and what’s now known as the back nine of the Meadow Valleys.  The new holes that Dye added after the fact—now known as the River’s fifth through 13th in particular---are nothing short of spectacular.  Major elevation changes, mostly downhill off the tee, swooping doglegs, and the constant risk/reward presence that tempts golfers to bite off as much as they dare, make this “second act” first-rate in every perspective.  As Dye once memorably commented, “Even the most stringent right-wing conservative may be a gambling maniac when it comes to golf.  I want to make sure risky shots are presented as often as possible.”

Dye’s artful integration of the new holes is somewhat overlooked, owing to his headline-grabbing creation several years later---the otherworldly Whistling Straits.  But for significant championships, most notably the 1998 and 2012 U.S. Women’s Open, the original course, now routed among the 36 existing holes, is played in a composite fashion.  There is great precedent, as it is much like Boston’s 27-hole Country Club being played as a composite 18 for numerous U.S. Opens, or as it was for the 1999 Ryder Cup.

Last - Teeth of the Dog